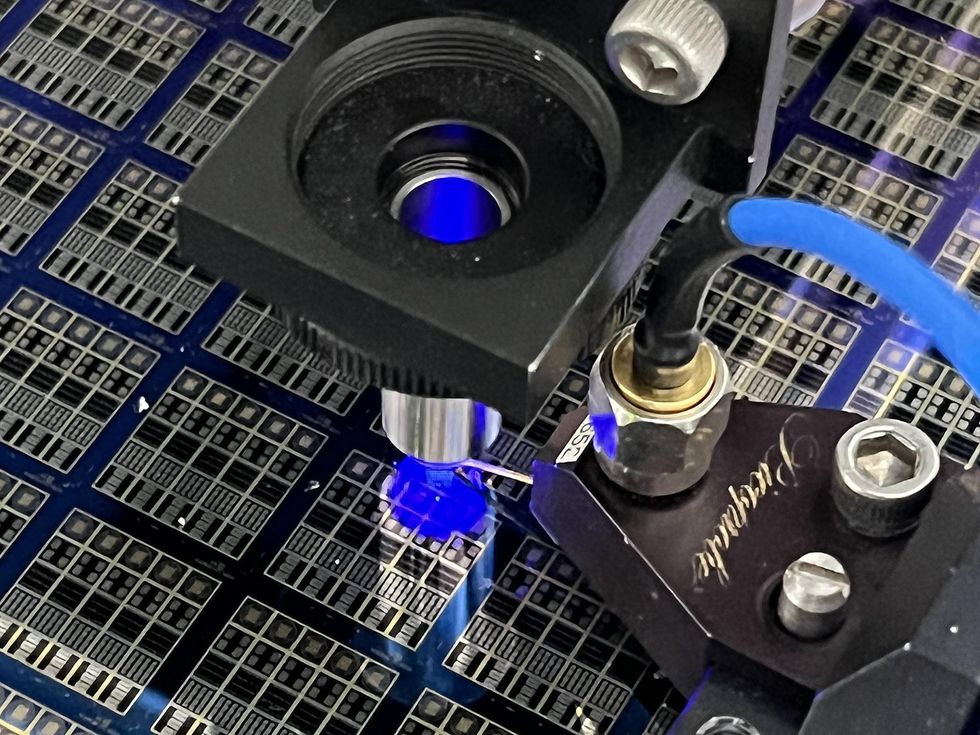 If a CPU in Seoul sends a byte of data to a processor in Prague, the information covers most of the distance as light, zipping along with no resistance. But put both those processors on the same motherboard, and they’ll need to communicate over energy-sapping copper, which slow the communication speeds possible within computers. Two Silicon Valley startups, Avicena and Ayar Labs, are doing something about that longstanding limit. If they succeed in their attempts to finally bring optical fiber all the way to the processor, it might not just accelerate computing—it might also remake it.

Both companies are developing fiber-connected chiplets, small chips meant to share a high-bandwidth connection with CPUs and other data-hungry silicon in a shared package. They are each ramping up production in 2023, though it may be a couple of years before we see a computer on the market with either product.

Ayar Labs, has succeeded at drastically miniaturizing and reducing the power consumption of the kinds of silicon-photonics components used today to sling bits around data centers through optical-fiber cables. That equipment encodes data onto multiple wavelengths of light from an infrared laser and sends the light through a fiber.

Avicena’s chiplet couldn’t be more different: Instead of infrared laser light, it uses ordinary light from a tiny display made of blue microLEDs. And instead of multiplexing all the optical data so it can travel down a single fiber, Avicena’s hardware sends data in parallel through the separate pathways in a specialized optical cable.

Ayar has the weight of history on its side, offering customers a technology similar to what they already use to send data over longer distances. But Avicena, the dark horse in this race, benefits from ongoing advances in the microdisplay industry, which is predicted to grow 80 percent per year and reach US $123 billion by 2030, fueled by a future full of virtual-reality gear and even augmented-reality contact lenses.

“Those companies are two ends of the spectrum in terms of the risk and innovation,” says Vladimir Kozlov, founder and CEO of LightCounting, a telecommunications analysis firm.

Avicena’s silicon chiplet, LightBundle, consists of an array of gallium-nitride microLEDs, an equal-size array of photodetectors, and some I/O circuitry to support communication with the processor it feeds with data. Twin 0.5-millimeter-diameter optical cables link the microLED array on one chiplet to the photodetectors on another and vice versa. These cables—similar to the imaging cables in some endoscopes—contain a bundle of fiber cores that line up with the on-chip arrays, giving each microLED its own light path.

Besides the existence of this type of cable, Avicena needed two other things to come together, explains Bardia Pezeshki, the company’s CEO. “The first one, which I think was the most surprising to anyone in the industry, is that LEDs could be run at 10 gigabits per second,” he says. “That is stunning” considering that the state of the art for visible-light communication systems just five years ago was in the hundreds of megahertz. But in 2021, Avicena researchers revealed a version of the microLED they dubbed cavity-reinforced optical micro-emitters, or CROMEs. The devices are microLEDs that have been optimized for switching speed by minimizing capacitance and sacrificing some efficiency at converting electrons to light.

Gallium nitride isn’t something that’s typically integrated on silicon chips for computing, but thanks to advances in the microLED-display industry, doing so is essentially a solved problem. Seeking bright emissive displays for AR/VR and other things, tech giants such as Apple, Google, and Meta have spent years coming up with ways to transfer already-constructed micrometer-scale LEDs to precise spots on silicon and other surfaces. Now “it’s done by the millions every day,” says Pezeshki. Avicena itself recently purchased the fab where it developed the CROMEs from its Silicon Valley neighbor Nanosys.

Computer makers will want solutions that will not just help in the next two to three years but will give reliable improvements for decades.

The second component was the photodetector. Silicon isn’t good at absorbing infrared light, so the designers of silicon-photonics systems typically compensate by making photodetectors and other components relatively large. But because silicon readily soaks up blue light, photodectors for Avicena’s system need only be a few tenths of a micrometer deep, allowing them to be easily integrated in the chiplet under the imaging-fiber array. Pezeshki credits Stanford’s David A.B. Miller with proving, more than a decade ago, that blue-light-detecting CMOS photodetectors were fast enough to do the job.

The combination of imaging fiber, blue microLEDs, and silicon photodetectors leads to a system that in prototypes transmits “many” terabits per second, says Pezeshki. Equally important as the data rate is the low energy needed to move a bit. “If you look at silicon-photonics target values, they are a few picojoules per bit, and these are from companies that are way ahead of us” in terms of commercialization, says Pezeshki. “We’ve already beaten those records.” In a demo, the system moved data using about half a picojoule per bit. The startup’s first product, expected in 2023, will not reach all the way to the processor but will aim to connect servers within a data-center rack. A chiplet for chip-to-chip optical links will follow “right on its heels,” says Pezeshki.

But there are limits to the ability of microLEDs to move data. Because the LED light is incoherent, it suffers from dispersion effects that restrict it to about 10 meters. Lasers, in contrast, are naturally good at going the distance; Ayar’s TeraPHY chiplets have a reach of up to 2 kilometers, potentially disrupting the architecture of supercomputers and data centers even more than Avicena’s tech could. They could let computer makers completely rethink their architectures, allowing them to construct “essentially a single computer chip, but building it at rack scale,” says Ayar CEO Charlie Wuischpard. The company is ramping up production with its partner GlobalFoundries and is building prototypes with partners in 2023, though these are not likely to be made public, he says.

Kozlov says to expect many more competitors to emerge. Computer makers will want solutions that will “not just help in the next two to three years but will give reliable improvements for decades.” After all, the copper connections they are seeking to replace are still improving, too.

From Your Site Articles

Related Articles Around the Web